Locked in the Moment 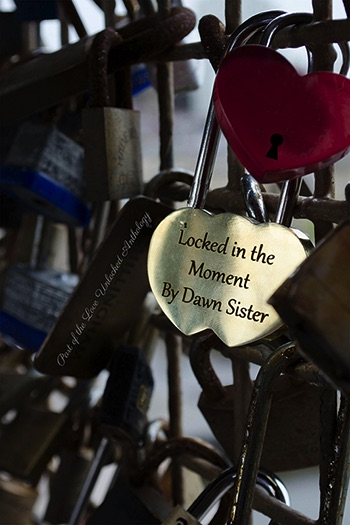 Due to a misunderstanding, the troll that lives underneath one of the most romantic bridges in Paris inadvertently unlocks every single padlock lovers have left there over the years. L'Authoritié de Fée Folklorique are up in arms. He has no idea what all the fuss is about. The noise was driving him mad. He just wanted a bit of peace and quiet.

A spell is cast, leaving the troll in a bit of a predicament. He is charged with the seemingly impossible task of fixing the locks before the spell can be reversed and he is allowed to return to his home. There are other complications, the least of which is the insistence and persistence of a fairy who is determined to help him against the wishes of his own people.

Now the troll has a dilemma. What is more important to him? The only home he has known for two thousand years, or a fairy he has just met?

A story from Love Unlocked - a collection of seven short stories and novellas - unique LGBTQ romances inspired by the Love Lock Bridge.

LOVE UNLOCKED:
The Trap by Claire Davis and Al Stewart
Writer's Lock by Victoria Milne
Locked in the Moment by Dawn Sister
The Weekend by J P Walker
The Scarlet Lock by Caraway Carter
He Melted Us by Ofelia Gränd
Chain of Secrets by Debbie McGowan

Dawn is from the North East of England. Her life is spent juggling. The juggling balls are: children, husband, work (occasionally), voluntary work, professional knitting (notice she doesn't class this as work), and writing. When she has time she actually sleeps. The whole point of writing for Dawn is just to get it all off her chest and out of her head. If she doesn't write it down then she ends up having long conversations with the characters out loud and her husband thinks she's crazy.... Read More

Other Publications by Dawn Sister: