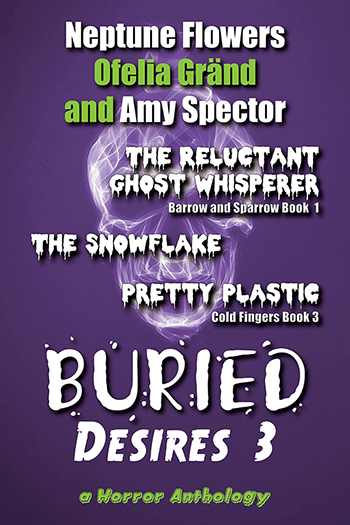 More tales of love, death and love after death.

Buried Desires is back. And now there's even more to love. From the ghostly to the grotesque, this time around Buried Desires 3 brings you three tales from horror authors, both old and new, offering up a perfect collection of romance and the macabre.

The Reluctant Ghost Whisperer (Barrow and Sparrow #1) by Neptune Flowers
All you need is love, or so they say!

When Adam Barrow employs a fit, capable guy, life begins to look up. His business thrives from the extra muscle, and so does Adam. Being around chatty Johnny really helps the time fly past. Adam is shy and inexperienced in ways of the heart, but very soon his awkwardness eases and he finds himself flirting and having fun.

Johnny Sparrow has a mysterious past and seems to have a knack of stirring up inexplicable presences. From the day he arrives on a motorbike, weird things begin to happen, like strange noises and creepy mists. Even motorbike Angus has a personality!

All you need is love, but can Adam find the strength to confront the ghostly goings-on? Can Johnny find a use for the egg whisk, and can Angus really carry them both to safety?

A story of paranormal divas, supernatural aromas and head-over-heels romance.

Barrow and Sparrow book one.

The Snowflake by Ofelia Gr&amulnd
Nothing inspires art like love.

Theophile Lekas has spent the last seventeen years trying to build a name for himself as an ice sculptor. Ice is his world, but he lives for Dylan Mincer.

But loving from afar isn't enough, and if Theo wants to win Dylan's heart, he'll need to sweep him off his feet. And what better way to do it than with a sculpture that will leave Dylan breathless and the world in no doubt of Theo's genius?

After an argument leads to murder, Theo is hit with true inspiration. And he has the perfect block to begin his project. For Dylan, Theo will create his masterpiece. And it will be as unique as a snowflake.

When Victor accepts a job with Pretty, a prestigious private hospital, to work alongside the handsome Austen Poole, Christopher ends up with one more thing to worry about. While it might seem like a dream job, there's something not quite right in paradise, and when Vic starts acting strangely, Christopher will stop at nothing to get his man back.

When striving for perfection, you sometimes need to get your hands a little dirty.