New Release: The Golden One - Reckoning by Hans M Hirschi 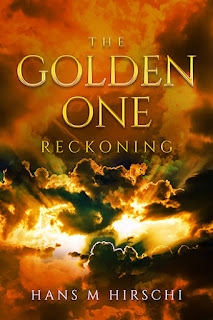 Blurb:
Jason is staying with the ailing Cheyenne elder Ninovan. Only the most heartbreaking news from Amberville can bring him back to face the biggest trial of his young life. Will Jason be able to fulfill his final mission as the Golden One? A mission from which no Golden One has ever returned?

Reckoning is the final installment of the gripping fantasy trilogy about Jason Mendez, the Golden One, who is called upon to save the world with his four best friends. Will Jason be successful? At what price? Will Earth be safe?

Editor's Review:
This is it: the end of an era, or a series at least.

Today is release day for Reckoning, the third and final part of The Golden One - Hans M Hirschi's young adult trilogy following the adventures of Jason Mendez who is, indeed, the 'Golden One'. If you haven't read the previous instalments, the links are at the end of this review.

I have such mixed feeling when I reach the end of a beloved series - for any readers new to Beaten Track Publishing, we publish the books we love, so my experience of reading them is much the same as yours. I go through every book at least twice, the first time tackling the nuts and bolts of the writing, checking the plot hangs together and that characters don't suddenly change the colour of their eyes, and so on.

The second time through is where I finally get to pay attention to the story, and I'll admit right here that The Golden One has had me raging and swearing (at the villains), smiling like a loon (at the sweet moments), laughing and rolling my eyes (usually at Peter - one of Jason's close friends and 'crew'), slumping in despair (at the injustice) and finally, in Reckoning, sniffling, oh, I have something in my eye, no I'm not crying, you're crying...

Obviously, I'm not going to tell you what made me so teary because I'd be giving away the plot, and we've kept this publication safely tucked away, no advance copies, until release day specifically to avoid spoiling the ending. Suffice to say it's a satisfying one...mostly. ;)

I kind of did a 'Best Supporting Role' for the first two instalments, with Laurel coming out as my favourite character from book one and Hannah in book two. For Reckoning, that prize goes to...[drum roll]...Micah. Yes, she is a cat, just an ordinary cat, but she's brave, loyal, feisty, and, of course, Jason can understand what she's saying. There is maybe a bit of anthropomorphising on the author's part when it comes to Micah's scepticism, incredulity and some of her judgements of human behaviour, but her nonchalance, especially when she's miffed with Jason, is pure cat and hilarious - a bit of light relief in the darker moments in Reckoning.

So the conclusion is here. No more Golden One, and while I hate saying goodbye to characters with whom I've spent a fair bit of time and know better than I know most people in the real world, it is a fitting conclusion to the trilogy and a journey I'm glad I had the opportunity to make.

The Golden One - Reckoning is book three and the final instalment of The Golden One trilogy, available in ebook formats from the usual places. Paperback available from Beaten Track Publishing and (imminently) Amazon. 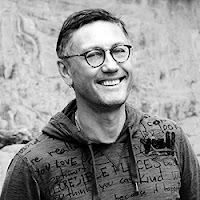 Hans M Hirschi has been writing stories since childhood. As an adult, the demands of corporate life put an end to his fiction for more than twenty years. A global executive in training, he has traveled the world and published several non-fiction titles as well as four well-received novels. The birth of his son provided him with the opportunity to rekindle his love of creative writing, where he expresses his deep passion for a better world through love and tolerance. Hans lives with his husband and son on a small island off the west coast of Sweden.