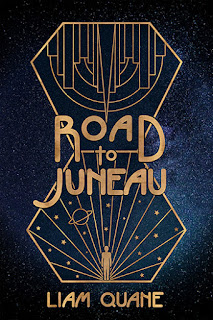 I have so much I want to say about this novel, but most of it would be spoilers. This is an incredible debut from Liam Quane - an author who has brought his scriptwriting and directing talents to the printed page, and his worlds translate very well into this format. It's helpful that the setting for much of Road to Juneau is a near-future/alternate post-apocalyptic New York City, so the reader has a frame of reference, albeit one slightly removed from the NYC we know. In that regard, the author does some light-touch world-building to set the scene, which in first-person present tense feels like Dan Hardacre - the main-character-sort-of-hero - is giving us a guided tour of his hometown, along with a brief history lesson.

So the scene is set. Now, I'm not a fan of post-apocalyptic fiction, and it's important I make it clear that this isn't really post-apocalyptic in terms of themes, merely setting. The story, at its heart (for me) is about unchecked power and (ir)responsibility. Thus, to some extent, Road to Juneau is allegorical - a critical perspective on current affairs as much as the fictional future, and aside from the 'nature' of the central characters, it is a future that's potentially only a step or two from where we are now.

For all of that, the novel isn't hard-hitting political commentary, although there is plenty of politics in it. There's also lots of subtle diversity, wry humour, fantastic adventures on Earth and elsewhere, and a few tear-jerking moments. In short, it's a darned good read - one which I wouldn't usually select as a 'pleasure read' based on genre, but the cover...wow, the cover! That would definitely have captured my interest, so I'd have ended up reading the book even if I hadn't had the privilege of publishing it.

Road to Juneau is an intelligent, entertaining, beautifully written novel for young and not-so-young adults and is available in hardcover, paperback and ebook formats.