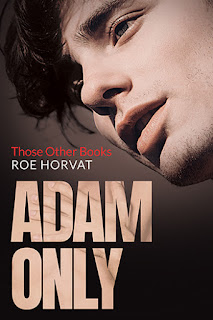 Blurb:
On stage, Adam lets his passion drive him. All his secret desires, everything nasty, dirty, and beautiful flows freely through him, for once in harmony. His soul thrives when his body moves, but only on stage. Adam’s passionate nature makes him a great dancer…and a failure at life. He’s a lonely, emotional mess. Going home with a man far out of his reach is the last thing Adam should do. Christoffer represents everything Adam isn’t: strong, independent, educated, and rich. His kind eyes, at odds with his brutish form, make Adam's knees and restraint buckle.

Once Christoffer sees Adam dancing, he’s lost. The young man is mesmerizing, otherworldly, and unpredictable. Whatever might happen between them, it will be transient, and Christoffer will most likely get hurt. The temptation is too great, however, and the sex explosive. He might as well enjoy every moment he’s given, even if it’s just one day, maybe two. If Christoffer treads carefully, Adam might stay until Monday.

***
Editor's Review:
Adam Only is a prequel to The Other Book, which, given its title (singular 'other book'), I think was meant to be a one-off. But here we are, reading Adam and Christoffer's story.

Other is also about othering - how societies alienate certain groups and individuals because of their difference from 'normal'. Specifically in relation to Roe's writing, it's about LGBTQ+ people - those 'perverts' with a 'sickness' who are deemed in need of punishment or treatment to get them back on the straight and narrow. When LGBTQ+ people are accepted and given rights, they're curtailed - 'don't shove it in our faces', 'keep to yourselves'.

Writing about The Others is resistance. It's a refusal to hide in the shadows.

In Roe's own words:

Aside from their social/political salience, Those Other Books are beautifully crafted stories about men who love men with a heavy emphasis on the rumpy-pumpy. Alongside that are many tender moments of intimacy - connections beyond the physical - which Roe does so well I too often get caught reading certain sentences over and over again, purely to wonder at their magnificence. Alas, this time around, my favourite line in Adam Only is a bit of a spoiler, so I can't share it.

I began by saying Adam Only is a prequel (and therefore part of a series), but I want to be clear: Adam Only is absolutely stand-alone. Readers of The Other Book have met Adam and Christoffer already and will love learning their back story, but new readers can enjoy it equally...and then go on to read The Other Book.

Adam Only and The Other Book are both available in ebook (Kindle/Kindle Unlimited) and paperback formats.

***
Buy 'Adam Only':
Beaten Track [Paperback]
Amazon [Kindle edition]
***
About the Author:
Queer fiction author Roe Horvat was born in the post-communist wasteland of former Czechoslovakia. Equipped with a dark sense of sarcasm, Roe traveled Europe and finally settled in Sweden. He came out as transgender in 2017 and has been fabulous since. He loves Jane Austen, Douglas Adams, bad action movies, stand-up comedy, pale ale, and daiquiri. When not hiding in the studio doing graphics, he can be found trolling cafes in Gothenburg, writing, and people-watching.