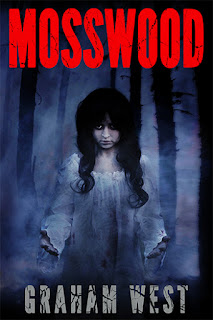 Blurb:
On the edge of Tabwell lies a forest where the dark secrets of the past wait to be uncovered...

It all began when Jenny Adams first dreamed of a young girl imprisoned in a dark attic. Now, over six years later, she's back where the nightmares started.

Mosswood has been transformed into a successful adventure park, and it is there Jenny meets troubled, flame-haired teen Bailey Rosales, and Cody Nelson, a seven-year-old who has some very special friends. Dead friends.

Why is Dennis Blakely, the park manager, tormented by visions of his own horrific demise, and why is an ex-councillor warning them to stay out of the forest at all costs?

Once again, Jenny finds herself calling on the spirit of Amelia Root in the search for answers, but it is a search that leads the whole family into a terrifying confrontation with Tabwell's past and the secrets that lurk beyond the dark waters of Mosswood's lake.

***
Publisher's Review:
I'm keeping this brief because the Mosswood launch party starts in exactly 45 minutes, and I don't want to be late. Equally, I didn't want to post this too much before the launch.

Of course, if I were better organised, I'd have written this earlier today...

Mosswood is book three of Graham West's Beyond the Dark Waters trilogy, and what a satisfying conclusion it is. As with Finding Amelia and A Rising Evil, we're following the paranormal twists and turns in the lives of Rob Adams and his daughter Jenny, now grown-up with a child of her own. It all began with a hit and run that killed Rob's wife and youngest daughter - Jenny's mother and sister, and it's a must to read these three books in order to fully understand the connections between the different characters, particularly in terms of family and who is related to whom.

I especially enjoyed seeing certain characters get their just desserts, and I still belief this is a brilliant exploration of the evil men do to women. Whether that's intentional on Graham's part or not, this is not only brilliant trilogy, it's also a saga with plenty of  (optional) food for thought.

I'll leave you with a little bonus content - never seen before, not in the published versions, but here is the epilogue that greeted me as I neared the end of Mosswood:

Jenny glanced across at her father, who was staring at the TV screen. “It’s been quite a journey, hasn’t it?” she mused.

Robert Adams nodded. “Yeah, but thanks to you, it all turned out okay.”

“Yeah, you’ve held everything together.”

Jenny laughed. “Hey, you did okay. You’re a good person, no matter what some people say about you!”

“She’s the one who’s been trying to keep you on track for the past few years.”

Jenny saw that look in her father’s eyes. He wasn’t going to let this lie.

“And who else has been slagging me off?”

“Well, Andrea Harding thinks you’re a prick, and she thinks you were a bit too quick taking up with Josie.”

“Oh, does she now!” Rob thundered. “Well, you can tell her from me—it’s none of her business!”

“Hey, don’t be getting stressed…”

Jenny grinned. “No, actually, she’s a social scientist and she’s married to Nigel.”

Rob spun around. “What? Farage? Well, he should bloody well stop buggering off to Brussels and get his own house in order. I mean, this country wouldn’t be in such a mess if they hadn’t given women the vote!” Rob huffed loudly, turning up the volume on the TV. “I can’t believe it. Me? Sexist? Bloody cheek!”

“Do you think Debbie will have guessed we’re trying to wind her up?”

Rob smiled—a smile that really did reach his eyes. “I imagine she will have, yes.”

“We’re fictional characters, babe. What can she do?”

Rob rolled his eyes. “Yeah, poor bloke. I wouldn’t want to be in his shoes!”

***
Buy 'Mosswood':
Beaten Track [Paperback]
Beaten Track [ebook]
Amazon Kindle
Smashwords
***
About the Author:
Graham West studied art at Hugh Baird college in Bootle, Merseyside, before joining the display team at Blacklers Store in Liverpool city centre where he spent seven years in the art department before moving on in 1981 to become a sign writer. He lives in Maghull with his wife, Ann, and has a daughter, Lindsay, and two grandchildren, Sonny and Kasper. Graham also plays guitar at weddings, functions and restaurants. He took up writing in 2000 and has had a couple of factual articles published in magazines. Mosswood is his third novel.