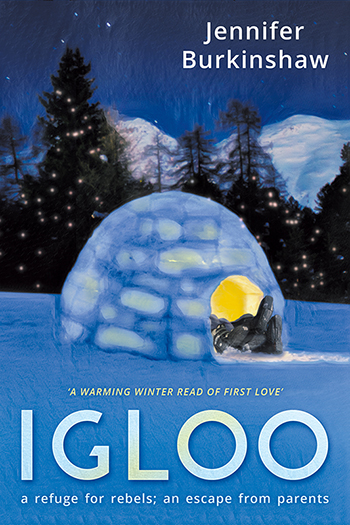 A surprise Christmas holiday in the French Alps should be a dream come true, but not for sixteen-year-old Nirvana. She has an important project to complete at home, and tensions are high with her parents. In desperation, Niv skips ski school and heads off-piste towards the forest, where she discovers a hidden igloo. Better still, it’s empty.

When its builder, Jean-Louis, finds her trespassing, he suggests they share the igloo, and as the pair find common ground in their struggles to be themselves, they realise they are each other’s perfect Christmas gift.

Too soon, Niv must return home to Lancashire. Now in two different countries, each faces new problems, alone, and their battle to be together becomes infinitely harder.

Is it a battle they can win? Or will their sweet, fledgling romance be lost to the seasons, like the igloo where it began?

Praise for Igloo:
“Igloo is a heart-warming story of first love set against the stunning backdrop of the French Alps. I was rooting for Niv and her journey from the start! Nirvana is such an inspiration to girls – particularly given the current market – for standing up for what she believes in. A girl who is passionate about joinery and can make an igloo from scratch? And make her own love story happen at the same time? Go Niv!”

– Eve Chancellor, poet and author of short stories on East of the Web

Just like Nirvana, Jennifer grew up in Lancashire. Also like Nirvana, she loves mountains, Christmas and border collies! The village where Nirvana met Jean-Louis is based on the one where Jennifer and her family used to own a little chalet, in Haute Savoie. There the similarities end, unfortunately. Jennifer taught English, Drama and Classics for twenty years in several schools, including four years in Paris. She later completed an MA in Creative Writing for Children at Manchester... Read More