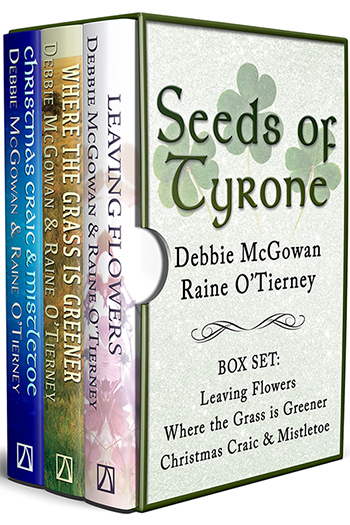 This box set contains books 1–3 of the Seeds of Tyrone series by Debbie McGowan and Raine O’Tierney - a series of M/M romances featuring characters from Kansas and Pennsylvania, USA, and Country Tyrone, in the North of Ireland.

Each of the books is stand-alone, but they are best read in order. Stories include scenes of intimacy between consenting male adults.

Book One: Leaving Flowers
Shy and awkward since childhood, Aidan Degas is now a man lost. His twin Nadia died tragically young, leaving him nothing but his job and the flowers he lays upon her grave. Patrick loves being assistant groundskeeper at the cemetery, but Aidan is so damaged that even with Patrick’s warm heart and Irish charm, it might not be enough to bring him back from the edge.

Book Two: Where the Grass is Greener
Mistakes were made, that’s for sure. But was it the night of passion? Or walking away afterward? That's the question Seamus Williams faces when he gets a late-night phone call from someone he never expects to hear from again—cowboy Chancey Bo Clearwater. But a world of problems now stand between Seamus and Chancey exploring what might have been, the least of which being the Atlantic Ocean.

Book Three: Christmas Craic and Mistletoe
Two couples, two unique stories of love at Christmastime… Harrison and Paulo were once passionate lovers—until tragedy tore them apart. Michael’s coming out didn’t go down well. But he has a guardian angel on his side—his unrequited long-term crush, Tom. Will the magic of Christmas in Ireland be enough to see these two couples through?