The Invasion of Tork: The Complete Collection 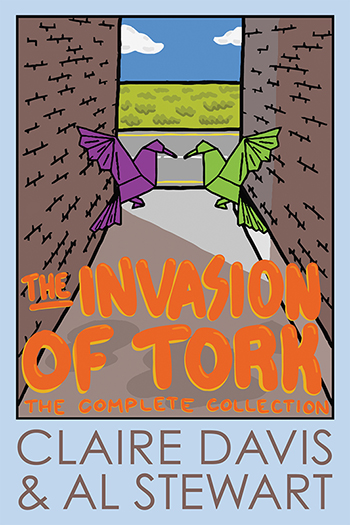 Available on Kindle Unlimited and as a paperback.

Collection includes the novellas The Invasion of Tork, The Invasion of Adam and If I Should Stumble – three young adult LGBTQ romances set in the UK, exploring social issues such as immigration, mental health and homelessness.

The Invasion of Tork

Adam is cool, intelligent and drop-dead gorgeous - all the guys tell him so! When he is forced to start voluntary work at the local homeless shelter, all he worries about is keeping the clients well away from him and finishing the placement as soon as possible. Until he meets Tork.

Tork is clever and funny. He makes origami models and reads Dickens. Tork has green hair and makes Adam's heart race with longing. But Tork is homeless and not at all impressed with Adam's attitude.

Can Adam see past his fear and arrogance? Can Tork give Adam a chance?

Can two such different men turn the world upside down and find out what really matters?

The Invasion of Adam

If I Should Stumble

Love is sure and timeless and forever. It whispers over the morning coffee and the last thought before sleep. Love is beyond hope, and cruel as life.

Kaz has been in the UK for almost a year, but the days pass by in an endless round of alcohol and nothingness. He has a story but no words good or bad enough to tell it, until one day, he is assigned a new peer mentor who asks him to help train a sponsored running team. Something that was stretched as old parchment breaks inside, and memories begin to re-surface.

Zack is overjoyed when his friend Adam asks him to be part of the sponsored run team trying to make money for the local homeless shelter. All day he makes cakes to lighten people’s load, but something is missing from his life. Then he meets the boy with eyes like the desert, and with every step he runs, Zack’s light burns away the darkness in Kaz’s heart.

As the race heats gets nearer, Tork, Adam, Zack and Jo realise that under Kaz’s careful programme, they have a chance to qualify and set right some of the wrongs of this world.

One person can change the world, and that person is Tork.