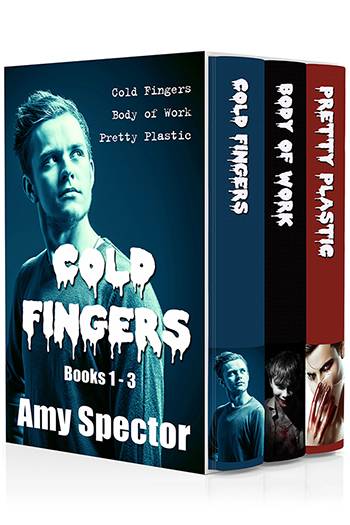 Christopher Minnick is at a bad place in his life. Turning thirty and newly out of the hospital, the last thing he wants to do is attend a birthday dinner, even one thrown in his honor. But when he is introduced to a friend's godson, things just might be starting to look up.

Victor Polidori seems like the perfect man. He's clever, attractive and interested. But, even as Christopher finds himself falling in love, there are some things that just don't add up. And when bodies start disappearing, Christopher knows he needs to get to the bottom of it.

Life with Vic isn't exactly what Christopher Minnick was expecting. His boyfriend has given him a new lease on life - literally - but he doesn't have a job, Jessie thinks he's a ghost, and there are only so many closets on hand for shoving Jonathan into. Now, with Lee back in the limelight, things just might become more than Christopher can handle.

Lee Hellstrom is hitting the big screen after more than three decades and he plans to make a lasting impression. The only problem is that not all the attention Lee has drawn is good.

When Lee goes missing, it's up to Christopher, Vic and Grant to save the old man from a most horrible of fates.

When Victor accepts a job with a prestigious private hospital to work alongside the handsome Austen Poole, Christopher has more thing to worry about. And when Vic starts acting strangely, Christopher will stop at nothing to get his man back.

Amy grew up in the Midwest. She spent far too much of her time in clubs - gay and straight alike - and far too little time in her university classes. That is, until she met a boy with cute hair and great taste in footwear. Now they live together with a number of small, rather noisy children and a dachshund named after her favorite horror actor of all time. She runs a number of sadly neglected blogs, and even though she has a lovely job that requires her to pick up a camera every now and again... Read More

Other Publications by Amy Spector: