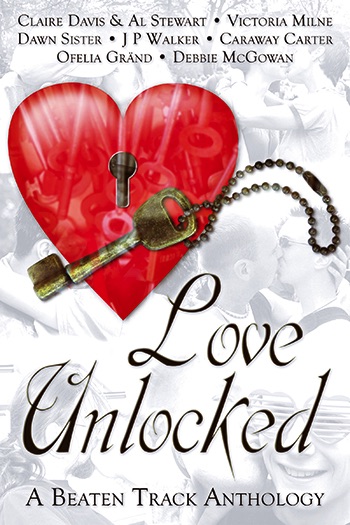 Love Unlocked is a collection of seven short stories and novellas - unique LGBTQ romances inspired by the Love Lock Bridge.

THE STORIES:
The Trap by Claire Davis and Al Stewart
Writer's Lock by Victoria Milne
Locked in the Moment by Dawn Sister
The Weekend by J P Walker
The Scarlet Lock by Caraway Carter
He Melted Us by Ofelia Gränd
Chain of Secrets by Debbie McGowan

Available as a paperback and ebook.

THE TRAP by CLAIRE DAVIS AND AL STEWART

When Sal attends an open exam for an apprentice artist to work alongside the infamous Matthew Picard, the last thing he expects is to be the winner. But then his role is revealed and nothing is ever the same again. As he toils day and night on the unique sculpture, strange sensations begin to affect both him and the watching master artist.

Matthew Picard thought he was through with men and love. What he wanted was for Sal to help him create one final monstrous masterpiece - The Trap.

But as he observes his young apprentice, his focus shifts, and so do the very walls of the gallery.

Is it the beauty of art, or something more magical at work?

As the sculpture is created, a power is unlocked.

Can love save them, or will they be trapped forever?

Spending a month in Paris to write his romance novel had seemed like the perfect plan, but one week in, Phil Pearson is suffering from a severe case of writer's block. With barely a word written, he's fed up and ready to cut his trip short.

When Laurent Marceau sees Phil in his café, it sends him hurtling into the past, opening old wounds and reminding him of the love he lost. But, after watching the aspiring writer struggle for inspiration, he surprises himself by offering to show him Paris through the eyes of a true Parisian.

Finally bursting with ideas, Phil is delighted to put pen to paper, albeit badly at first. As the writer finds himself falling in love for the first time, Laurent knows he needs to decide quickly if he's strong enough to return his affections, or whether it would be better for them both if he walked away. He knows he may not have a choice, once Phil finds out the truth.

LOCKED IN THE MOMENT by DAWN SISTER

Due to a misunderstanding, the troll that lives underneath one of the most romantic bridges in Paris inadvertently unlocks every single padlock lovers have left there over the years. L'Authoritié de Fée Folklorique are up in arms. He has no idea what all the fuss is about. The noise was driving him mad. He just wanted a bit of peace and quiet.

A spell is cast, leaving the troll in a bit of a predicament. He is charged with the seemingly impossible task of fixing the locks before the spell can be reversed and he is allowed to return to his home. There are other complications, the least of which is the insistence and persistence of a fairy who is determined to help him against the wishes of his own people.

Now the troll has a dilemma. What is more important to him? The only home he has known for two thousand years, or a fairy he has just met?

THE WEEKEND by J P WALKER

Nat's been through a rough breakup and trust does not come easily. When she accompanies a group of friends to Paris for a hen weekend, she finds a connection she wasn't looking for, in the form of beautiful, passionate Morgan. They quickly fall into a wonderful weekend fling and even engrave their initials into a lock and attach it to the most romantic bridge in the world, Love Lock Bridge.

But was that weekend fling all there was, or will news of the bridge being taken down lead to something more?

THE SCARLET LOCK by CARAWAY CARTER

Brandon Marshall, in Paris for his twin sister's wedding, has a fling before the big day. At the end of a whirlwind week of discovering each other, Brandon and his lover place a scarlet lock on the Love Lock Bridge.

Follow Brandon through six years of letters - to the citizens of Paris, on everything from how to make love, to eating passionate fruit - and to the lover, who is now his brother-in-law.

The locks are being removed, the bridge refitted... What will be the fate of The Scarlet Lock?

HE MELTED US by OFELIA GRÄND

All Delron wants is to live his life with Phillipe, but when their love lock is stolen from Pont des Art, their relationship is in jeopardy. Without the lock holding them together, Delron is convinced they'll crash and burn. The only way he can save their relationship is to find the stolen lock, and that is just what he plans to do, no matter what.

Phillipe loves Delron, he really does, but it's driving him insane that Delron can't see that a padlock is simply a piece of metal. The lock has nothing to do with them, not really. Up until the night the lock was stolen, their life was great, but Del's crazy behaviour has Phillipe wondering if he has ever really known his boyfriend.

Delron's search leads him through art-filled Paris, but will a symbol of love ever be enough to soothe the mistrust his quest has planted in Phillipe? Phillipe always thought he'd spend the rest of his life with Del, but who can live with anyone willing to break the law just to find a padlock when they can buy a new one in just about any shop?

CHAIN OF SECRETS by DEBBIE MCGOWAN

Josh and George have always shared the special bond of friendship. From days in primary school, to holidays spent riding their bikes along the canal, theirs is a promise to remain best friends forever.

But can that promise withstand the trials of adolescence, and the changes in their feelings towards each other?