Coming in from the Cold 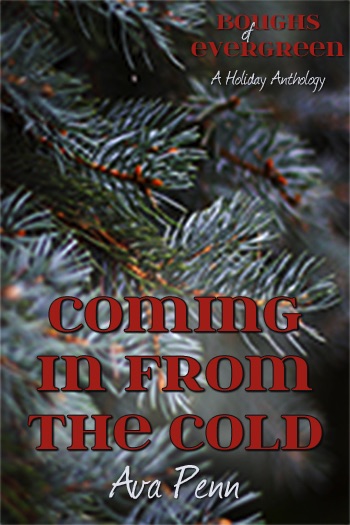 A story from Boughs of Evergreen: A Holiday Anthology

What's a poor, East coast boy fending for himself in Colorado to do when winter sets in on the Rockies?

Declan Stoeber finds himself freezing every minute of the day once autumn ends and the snow begins to fall in the Centennial State. With no family to go home to for the holiday season, he plans to put extra time into his studies and maybe look for a part-time job. What he gets is a part-time job with benefits and a few new friends.

Xander Duchesne is a savvy businessman in the harsh world of deals and projects. Estranged from his mother due to her matchmaking tendencies, he is resolved to spending Yule (or Winter Solstice) by himself for the first time in his life. He wasn't expecting his mother's impossible-to-ignore demands, and he certainly wasn't prepared for a college freshman who was just coming in from the cold.

Ava Penn is an incurable bibliophile with a passion for food, romance, and nature. This often shows in her writing. Other interests include anime/manga, video games, horses, and Amtgard. She loves to hear from readers, so feel free to get in touch.... Read More

Other Publications by Ava Penn: